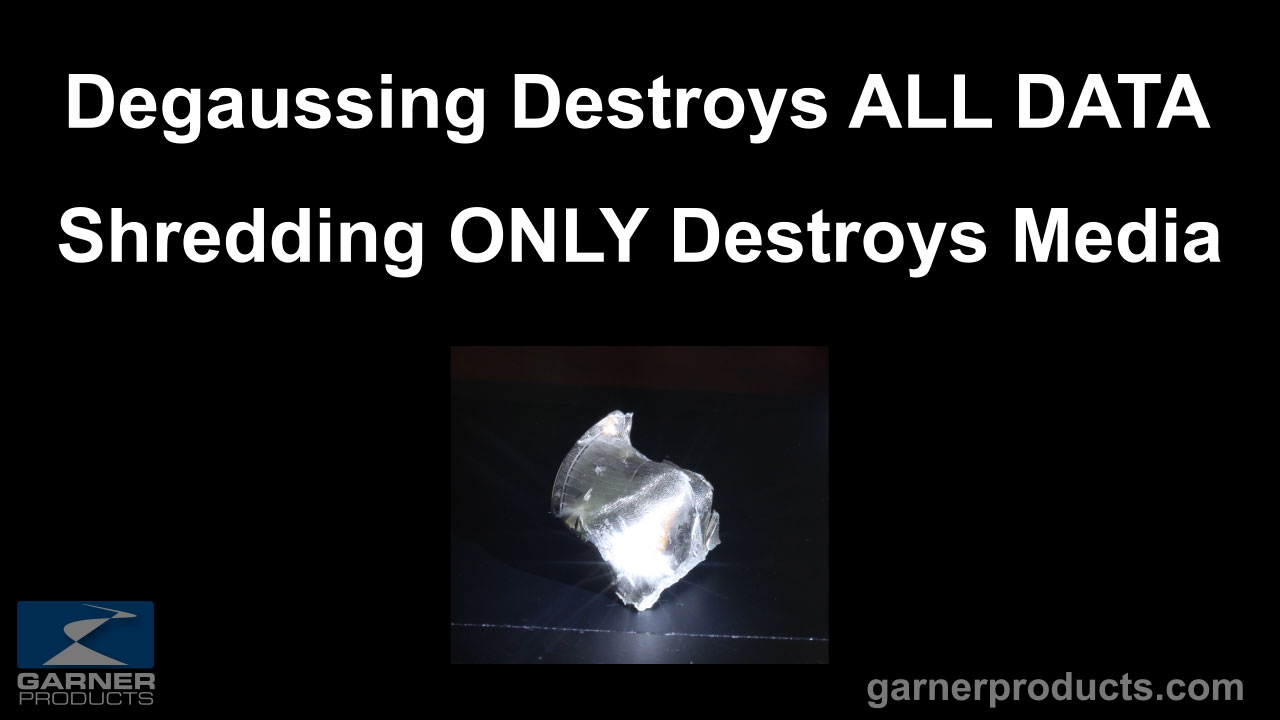 The Perils of Hard Drive Shredding

When it comes to hard drive shredding, looks can be deceiving. A hard drive that has been shredded into fragments looks obliterated but retrievable data still exists. A degaussed drive, on the other hand, may look untouched but data is completely sanitized and no longer exists.

How does a shredder work?

A shredder works by lining up rows of metal teeth which cut the hard drive casing and platters into multiple, sometimes small. However, there is no standard as to what constitutes “shredding” a hard drive. Some shredders only cut the hard drive in half.

Hard drive shredders are filled with moving metal parts and are heavy. Many weigh over 1,000 pounds (453 kg) and are difficult to transport to secure locations. When shred trucks go to the facility, the hard drive shredder usually remains outside.  The media needs to leave its secure environment to be brought to the truck which creates an opportunity for loss during transfer.

Hard drives are filled with sensitive data, from clients’ social security numbers and financial information to nuclear weapon plans. Hard drive shredding is a commonly utilized way to physically destroy a hard drive.  A hard drive shredder mangles the hard drives so that thieves will be less inclined to attempt to retrieve the data contained on the shredded remnants, but it does not destroy. Shredding a hard drive is insufficient for today’s technology, a modern hard drive stores 600,000 pages of data on a 2 millimeter-wide shred particle. That’s a particle smaller than a grain of rice!

Is my shredded data safe?

The common misconception is that shredding media renders the data unrecoverable. However, shredding or physically destroying the media does not remove the data from the hard drive disk platters because data is stored magnetically. Data is retrievable from large pieces of a shredded drive with the use of internet-available software and tools and even smaller pieces of shredded hard drive can be read with the use of magnetic force microscopes (MFMs).

Degaussers, like the Garner TS-1XT NSA listed degausser,  erase data by generating a powerful magnetic field that permanently removes the magnetic properties on the disk platters or tape. Degaussing erases all recorded data patterns on the media. Degaussing (demagnetizing) of approximately 10,000 gauss or more eliminates all data from both working and non-working hard drives and tape. Hard drives are rendered unusable after being degaussed but are recyclable for their components.

Garner Product’s degaussers produce a magnetic field to ensure complete sanitization of all sensitive data on magnetic media, such as hard drives and tape. To start degaussing, simply place the media in the degaussing chamber and close the drawer or door (depending on the model). In seconds, a strong magnetic field will encompass the entire media, sanitizing it completely. After degaussing, magnetic hard drives and some tape are unusable.

For non-NSA purposes, degaussing is a method of data destruction requiring no further action because the data is gone. A degaussed drive is a sanitized drive and can be disposed of without the need for further steps. Shredding after degaussing is not necessary for non-NSA purposes but is still considered a best practice to dissuade data thieves.

Because there are data remnants on a shredded hard drive, the National Security Administration (NSA) requires media to be degaussed before the media is released for shredding or physical destruction. This two-step process ensures complete data destruction and terminates the risk of a data breach.
Read more about NSA listed degaussers.

According to the NSA standards, hard disk drives that have been degaussed must also be physically damaged by deforming the internal platters “by any means.” This means that a hard drive may be crushed, punctured, broken, or otherwise destroyed. The only caveat is that the internal platters must be damaged and not just the external casing of the drive. According to NSA standards, a degaussed drive should be shredded or destroyed. 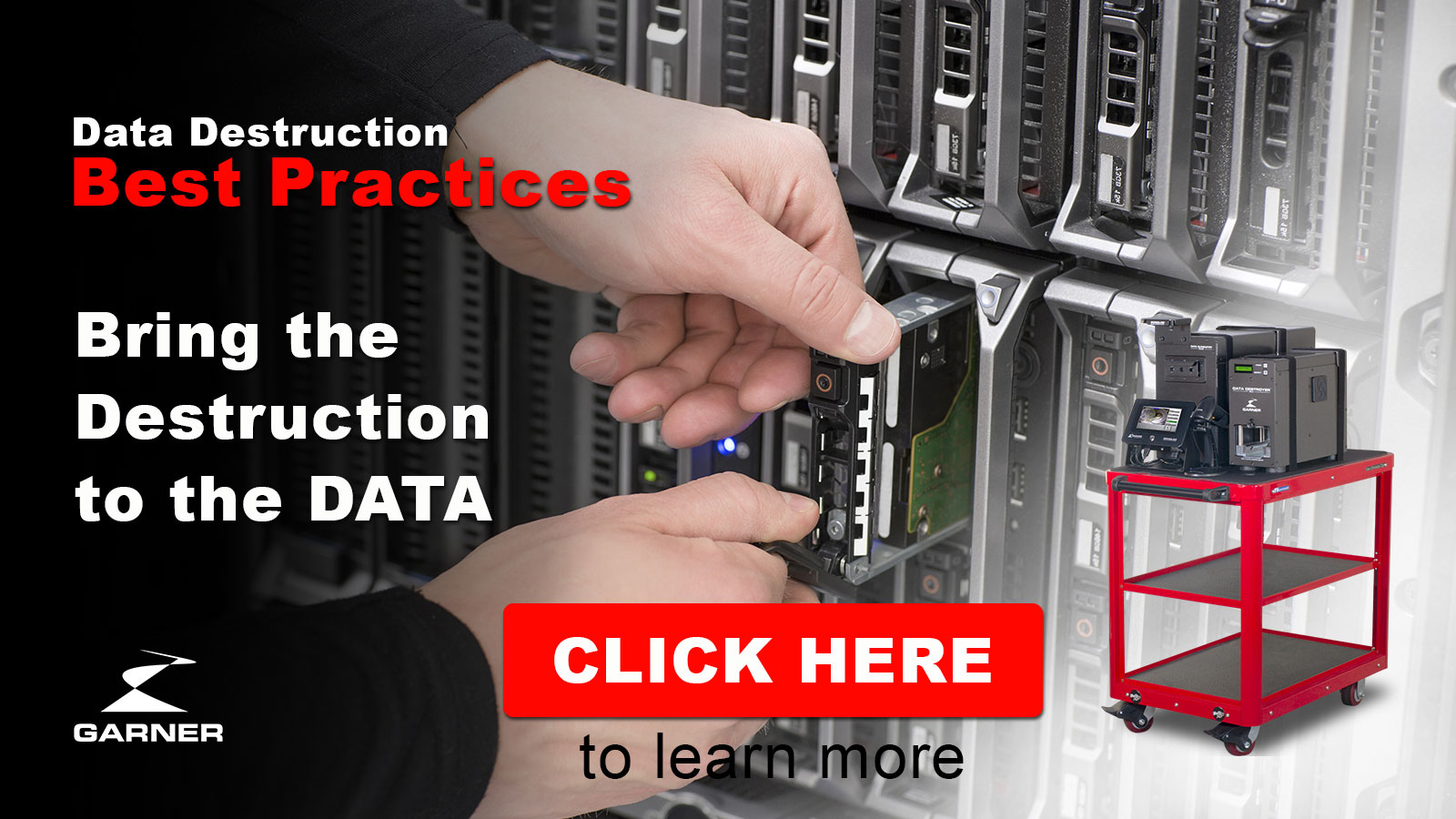 Environmental impact of shredding vs degaussing

An HDD is made of several materials including steel, aluminum, various plastics, gold, and copper. Ground up, these materials are hazardous to breathe. A shred truck that turns hard drives into small particles must have a negative pressure vacuum system to contain the shredded particles that are hazardous to the lungs. These particles are not recyclable. Garner Products manufactures degaussers and destroyers, which bend, break and mangle hard drives following degaussing. Garner’s degaussers and destroyers do not create toxic byproducts and the hard drives are recyclable after the data is destroyed. Read more about our sustainable practices.

So what’s the takeaway?