In a world where change is the only constant, it takes more than a great idea to build a company. Long-term success requires a continuous cycle of observation, innovation, quality control, and service.

Since 1959, we’ve been paying careful attention to the technology landscape and our customers’ needs. That ongoing analysis has given us a deep understanding of our industry and enabled us to solve a serious data security problem many companies don’t realize exists. It has also allowed us to develop lasting relationships with our customers to pioneer new ideas that help them meet their data-security challenges with solidly built products that are remarkably compact, efficient, and easy to use.

Founder Robert Stofan starts Audiolab Electronics in the garage of his home in Sacramento, California. The company provides engineering services to radio stations and acts as a reseller of radio equipment.

Robert Stofan designs and manufactures the TD-1, the first commercially available AC tape degausser.  His professional reputation as an engineer and the producer of high-quality products earns a growing customer base. He quickly outgrows his garage and moves into the company’s first commercial location on Rosebud Lane in Sacramento.

The company is incorporated as Audiolab Electronics, Inc. Its business still includes engineering services for radio stations, but the company also introduces the TD line of compact, commercial tape degaussers. 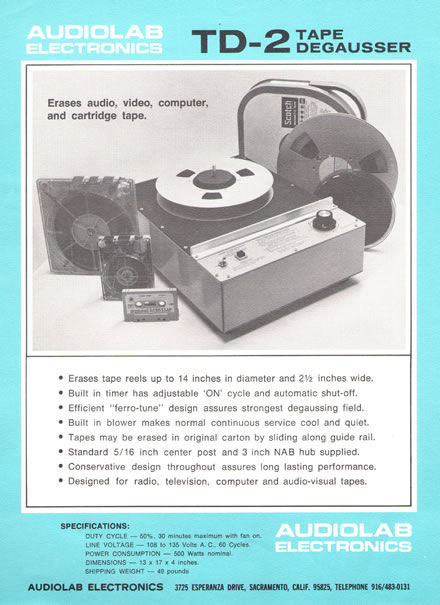 Ronald Stofan joins his father in the business. The company automates the degaussing process by introducing the Audiolab CDS line of degaussers, a conveyor-belt system that moves tapes through the degausser.

The company completes its transition to second-generation ownership. Robert Stofan retires and his son, Ronald, becomes the company’s president and CEO.  This decade sees the expansion of Audiolab from a small, regionally focused business to a nationally recognized U.S. manufacturer.

Garner moves to its current corporate headquarters and manufacturing facility at 10620 Industrial Blvd. in Roseville, California. The new site allows the company to add an in-house machine shop.

The current decade proves monumental to Garner’s growth from a U.S. manufacturer to an international market leader, with the list of its FORTUNE 500® customers growing longer each year. The company significantly expands its presence in the global market by signing international distributors in Singapore, the United Kingdom, and India. All of Garner’s products are independently tested and certified to meet CE/ANSI safety and interference standards.

As technology evolves, Garner will continue its long-standing reputation of providing innovative solutions to the ever-increasing challenges of data security.